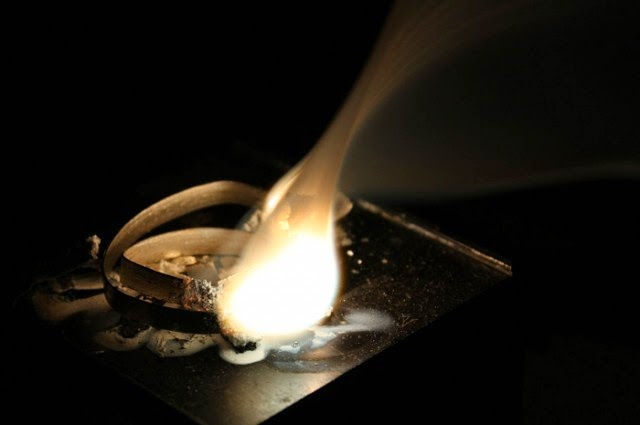 We encounter thousands of chemical reactions every day: plants use them in photosynthesis, metals rust over time, and combustion reactions provide us with heat and light, among thousands of other daily uses. Chemical reactions occur when reactants transform into new
substances, called products, through creating and breaking bonds between atoms. Sometimes the process creates some pretty wild effects. Check out our top 10 chemical reactions below:

When aluminum rusts, it creates a protective oxide layer that prevents the aluminum atoms underneath from further rusting. That is, until mercury is applied. Mercury prevents an oxide layer from forming, making the rust reaction continue uncontrollably. The process isn't as fast as what's depicted in the GIF though; it actually took two hours to rust through the aluminum beam above. What isn't depicted in the GIF is the sloughed off rust that formed a pile at the base of the aluminum beam as the reaction progressed.

The reaction depicted above, nicknamed the "Pharoah's Serpent," actually use to be a common classroom demonstration. It also use to be sold in stores as fireworks until people realized it's actually fairly toxic. As its name hints, it contains very poisonous mercury. Mercury (II) thiocyanate exists as a white solid that when heated, expands to become a brown solid due to its decomposition to carbon nitride. Sulfur dioxide and mercury (II) sulfide are also produced. Nowadays, if you want a similar effect but don't want to risk touching mercury, you can try making a "Black Snake" by heating a mixture of sugar and baking soda in a beaker.
3) Explosive Gummi Bear (Heated Potassium Chlorate Reacts with a Gummi Bear)

Potassium chlorate is considered a strong oxidizing agent. When it's gently heated, a decomposition reaction occurs, which produces potassium chloride and a lot of oxygen. This excess oxygen is enough to ignite something like a Gummi bear if it's dropped into the solution, which produces light, heat, carbon dioxide and water. The heat from the Gummi bear reaction further fuels the original decomposition of the potassium chlorate. The result is the extremely rapid combustion reaction you see in the GIF.
4) Copper Displacement (Iron Reacts with Copper Sulfate)

When iron is added to copper sulphate, a single displacement reaction occurs. In the GIF above, iron rods are placed in a test tube containing a bluish copper sulphate solution. Since iron is more reactive than copper, it displaces the copper to form iron sulphate. The result? Copper deposits form on the iron rods and the solution changes color as it becomes iron sulphate. If you remove the copper from the solution and reweighed the rods, you'd see that it lost a mass equivalent to the amount of iron that reacted to form iron sulphate.
5) Fire Bottle (Isopropyl Alcohol Reacts with Oxygen)

This combustion reaction in the GIF above, sometimes called a "Fire Bottle," is actually just 70% alcohol reacting with heat. Very little alcohol is poured into the bottle, which is then shaken to mix it with air. This turns it into a vapour and it can then be lit from the top of the jar, producing the combustion reaction you see. The reaction travels down the container, making a 'whoosh' sound as it uses up the oxygen inside the bottle and eventually puts itself out.
Posted by tajuddin at 12:14